“Forewarned is forearmed as they say!”

As first time parents, we were weighing up the pros and cons of attending Antenatal Class. We figured we’d learn something new so thought why not?

Friends of ours had told us stories about the lady leading the class who walks round leaning on furniture in mock labour moaning “ooo” and “ahhhh” at regular intervals. Aside from learning how to care for our imminent baby, this sounded amusing so we decided to go and maybe have a laugh too. We could choose to attend classes once a week for 8 weeks but we didn’t really want to commit to a weekly class in the winter so we opted for the weekender – which was nothing like the pre-pregnancy weekenders of our past…

To our mild disappointment, our leader was a bit more reserved than the eccentric lady in our friends’ stories but since we were already there, I was determined to find something to take away from the experience. We helped ourselves to refreshments as couples entered the room expectantly and took their seats in the circle. Cuppa tea? Don’t mind if I do.

Dutifully, we introduced ourselves gesturing  towards handwritten sticky labels on our clothing to prove our identity. Visible panic appeared on partners’ faces as they frantically recalled how many weeks preggers their partner was, “Err, she’s 35 or 36 or 37 weeks”. Shoulders visibly relaxed when the next fella had to introduce his other half and the group’s attention was diverted. There seemed to be an air of sympathy for a woman on her own who quickly reassured us that she did in fact have a partner who was simply at work and would be joining the group on Day 2. I was glad; I’d been imagining how hard pregnancy must be without support from a partner.

We were asked to join another couple for a discussion, where we swapped pregnancy woes and they shared their previous labour story as they were expecting their second child. I appreciated having a chat with people who have already experienced labour given that we were about to enter into the unknown.

The group was asked to take part in a card activity, identifying and sorting the different stages of labour. Some things were common sense, other things needed a bit more thinking and I was glad to have been reading pregnancy books donated by friends. Me and Lad looked at each other, “What on earth is a ‘ventouse’ delivery?” We now know that in the event that baby needs help to get out, a cap is placed on the baby’s head and is effectively sucked out. We both know that we don’t really want that but who knows what will happen on The Big Day?

Transition is the name for the phase after early labour where mothers generally scream “I can’t cope” and this was the bit that stuck in my mind. Apparently, we all reach that point where contractions take their toll and it supposedly means that you’re closer to meeting your baby and therefore the fear should be embraced. We’ll see when I’m in full blown labour.

I had expected a tour round the actual facilities but we were shown a video of the maternity ward’s offerings instead. Having already had a visit to triage/labour assessment ward in previous weeks due to reduced foetal movement, we felt that we knew what to expect from the staff and had a good understanding of where to go and what to do. If you get chance to visit the unit/ward itself, I’d suggest it so that it’s one less anxiety on the day itself.

After lunch, we were put into groups for the ‘Pain Relief Discussion’. The teachers amongst us became group scribes, conforming to our occupational stereotypes. We were asked to read the laminated cards of information and as a group rate the pros and cons of each pain relief method. Sounds riveting, right? Recently, friends and family have shared their stories about gas and air, diamorphine and epidurals which were lost on me so it was helpful to understand benefits and drawbacks for me and baby. It made me realise that there is little point in deciding which pain relief to have just yet and just see how the labour progresses.  Lad and I left the day feeling like we knew a bit more about labour and pain relief. Although, the fact that I’d actually got to give birth soon started to feel real… 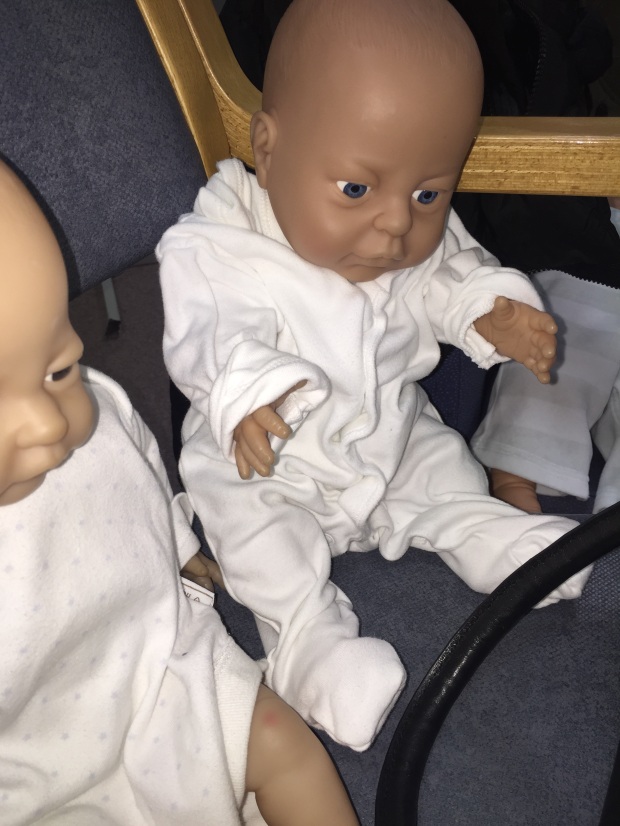 As promised the partner of lady-on-her-own was there on the second day. Day 2 was a chance for us to try basic yoga style breathing exercises and for Lads to try out their massage techniques.  Expectant mothers took seat on birthing balls while partners positioned themselves behind them. I steadied myself on the birthing ball while my Lad started to stroke the bottom of my back. I quite liked being the guinea pig while he tried the so called Waterfall & Cat Paws hand movements. It’s a skill in itself not to fall off of the ball, believe me!

Soon after, we were shown a video clip about breastfeeding. Despite our decision to bottle feed, I was amazed to see that during skin to skin contact the baby, just minutes old, automatically searched for the breast and instinctively knew what to do. Truly fascinating.

We were shown photos of the different stages of a C-Section to prepare us ‘just in case’ it to show us what to expect. We were given baby dolls and listened  to an audio of a baby crying. We had to soothe and reassure our babies before dunking it in a washing bowl and showing off our baby bathing skills. Nappies were removed to reveal mustard or marmite surprises mimicking baby’s first deposits, much to everyone’s amusement.

So was it worth giving up a weekend to attend the class? True, some of the information could be understood from books, advice from friends or family instead but I felt that we did learn more by sharing ideas with others. I’d say the biggest benefit was for Lad and I to be able to share our feelings about pregnancy and labour with other couples in the same boat. Forewarned is forearmed as they say – Bring on The Birth!